How are the gemstones set into the gold? How does this piece compare to a contemporary brooch or pin? 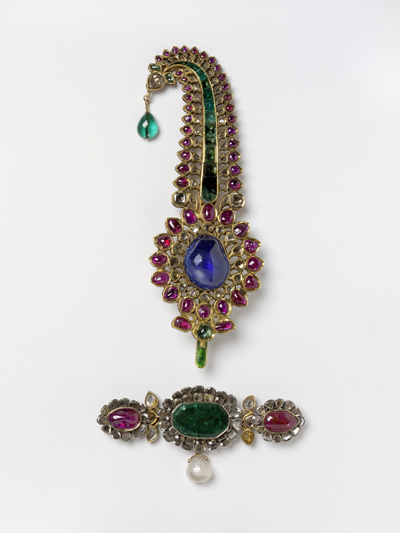 Sarpeches or turban ornaments were the ‘bling’ of their time. What is the bling of our time? How do you feel about these symbols of wealth and power?
New to Tumblr? Start here.

This spectacular sarpech (turban ornament) is made of rubies, emeralds, diamonds, a sapphire and a pearl set in gold. It consists of a jigha, a feather-shaped upper part worn vertically, and a sarpati, worn horizontally. The style of this piece is typical of Murshidabad, an important sub-Mughal state.

Jewellery and gemstones were collected by rulers not just as desirable and expensive objects in themselves, but also as symbols of kingship. At the Mughal court, a turban ornament was bestowed as a symbol of favour on loyal courtiers, a convention that spread throughout the Indian subcontinent. After an important battle, the British declared Nawab Mir Jafar of Murshidabad the state’s ruler. The newly appointed leader then gave this turban ornament to British Admiral Charles Watson in July 1757 as a token of his appreciation.

The gemstones in this turban ornament are set in the traditional Indian style – the gemstones are finely polished instead of cut to preserve as much of the original gemstone, and then set into a gold ‘cup’ lined with silver using a dot of resin to hold it in place. The European jewellery-making technique of cutting gemstones and setting them in place using a ‘claw’ of gold was introduced much later. As the power in India shifted during the time of British imperialism, maharajas increasingly commissioned jewellery from European jewellers including Cartier.