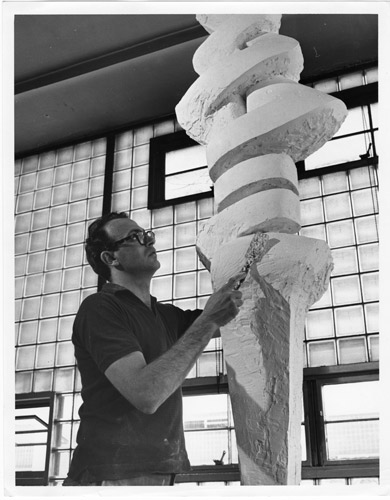 An artist can be defined as someone who still believes in the human hands.

Gregory Humeniuk, Curatorial Assistant, Canadian Art talks about the work of artist Sorel Etrog, and his life in Toronto.

In 2000, a Toronto newspaper dubbed artist Sorel Etrog the “Grand Old Man of Canadian Sculpture.” It was an apt description, after a career spanning five decades including the installation of outdoor sculptures across Toronto, Canada and beyond. Yet Etrog was much more - a painter, draughtsman, film maker and not least, a literary man. He was keen to collaborate with the great thinkers of his generation, including playwrights Samuel Beckett and Eugene Ionesco, Toronto media guru Marshall McLuhan and composer John Cage.

How Did Etrog Come to Toronto?

Etrog was born into a Jewish family in Romania in 1933. After a childhood spent in flight from the Nazis and Soviets, he immigrated with his family to Israel in 1950 where he began to study art and exhibit. In 1958 he won a scholarship to the Brooklyn Museum of Art School and moved to New York City. There, he had a chance encounter with Toronto collector and AGO patron Sam Zacks, who invited him to Canada.

Etrog permanently settled in Toronto in 1963. Recognition came quickly with museum purchases, international exhibitions such as the Venice Biennale (1966), and a commission to design the Canadian Film Award statue, now known as the Genie (1968). Etrog resided in our city until his death in early 2014.