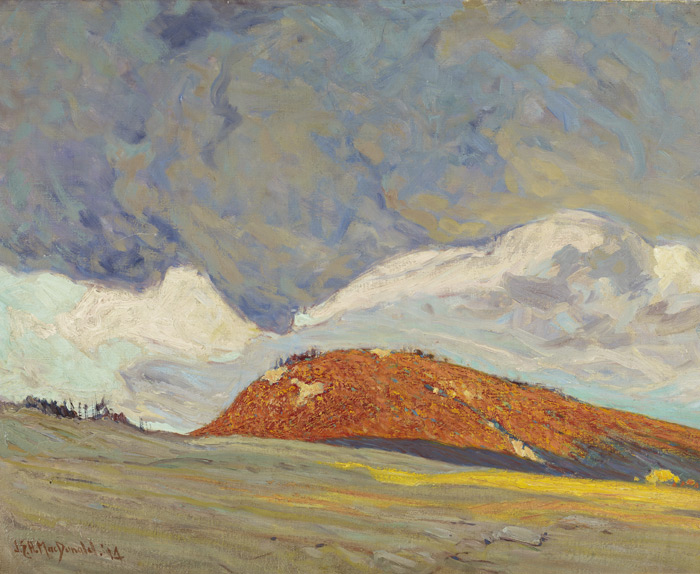 J.E.H. MacDonald (Canadian, 1873 – 1932), Sunset after the Rains, 1914, oil on canvas. Collection of the Toronto District School Board. Acquired by Western Technical - Commercial School.

Sunset After the Rains

James Edward Hervey (J.E.H.) MacDonald was born in 1873 in Durham, England to Canadian parents. At the age of 14, MacDonald studied art in Hamilton at the School of Art and Design and at the Toronto Art Students League.

MacDonald was a man of many creative talents. He was a painter, educator, poet, and commercial artist. He worked with the Toronto firm Grip Limited, where he met other artists who would later form the Group of Seven. MacDonald was the oldest member of the Group of Seven, and one of the group’s most vocal advocates.

He continued to work as a graphic artist, fine artist, and head of the Ontario College of Art (now OCAD University) until he died in 1932.

“The painter will look around him…and finding everything good, will strive to communicate that feeling through a portrayal of the essentials of sunlight, or snow, or tree, or tragic cloud, or human face, according to his power and individuality.”

MacDonald’s goal was to paint in a way that will show life as “enlarged” or bigger, brighter, and more noticeable. He painted Sunset After the Rains around the time the Group of Seven was being formed, and used the dramatic light to enhance the mood of his painting. Dark clouds part to reveal bright sunshine, and bold colours flash on the sunlit ground. Shadows in blue and purple highlight the contrasting oranges and yellows of the field. MacDonald has been compared to iconic French painter Vincent VanGogh, who also used bright colours and vigorous brushwork to produce intense moods in his artwork.

The painting was acquired by Western Technical-Commercial School before it became part of the TDSB collection.

In November 1911, MacDonald exhibited sketches at the Arts and Letters Club of Toronto. His sketches caught the attention of Lawren Harris, who encouraged MacDonald to keep painting and show his work whenever he could. In January 1913, MacDonald attended an exhibit of Scandinavian Impressionist paintings in Buffalo, N.Y. He was inspired by the Scandinavian artists’ uninhibited approach to northern wilderness and felt that it could be adopted by Canadian painters. Both MacDonald and Harris were determined to create a kind of “national” art.

Like many of the members of the Group of Seven, MacDonald lived, worked, painted, and taught in Toronto. Some of his residences include: Pacific Avenue in High Park, the Studio Building at 25 Severn Street in Rosedale, and later in Thornhill on Centre Street, at a property affectionately called Four Elms. MacDonald also helped Tom Thomson design and build a cottage by hand at 475 Quebec Avenue (High Park Area) in 1907.

There are always numerous paintings by MacDonald on display at any given time. The AGO has collected a number of works by MacDonald, beginning in the early 1900’s up until 1932, the year of his death.

“It is the work of the Canadian artist to paint or play or write in such a way that life will be enlarged for himself and his fellow man.”

Q1. MacDonald loved to emphasize moments in nature, or certain aspects of the natural environment. Look at each of MacDonald's paintings in the image gallery carefully, and determine what aspect of the natural or man-made world the artist is trying to highlight. How is the artist drawing attention to his chosen subject?

Q2. What roles do people play in each painting? What evidence of human intervention can you see in each artwork?

Q3. Define and discuss the terms "urban", "suburban", and "rural". Make a list of urban, suburban, and rural areas close to you. Then determine aspects of each area that you could highlight in a painting or drawing, and an overall mood for your picture. How will you choose materials and use the elements and principles of design to draw attention to their unique characteristics? Think about ways to emphasize one element, while downplaying others to create a dramatic moment or mood. Discuss your artistic process with your class as you present your work.

View works by MacDonald from the National Gallery of Canada: