Examine the hilt or handle of this sword closely. What is it made of? How would you describe the pattern? 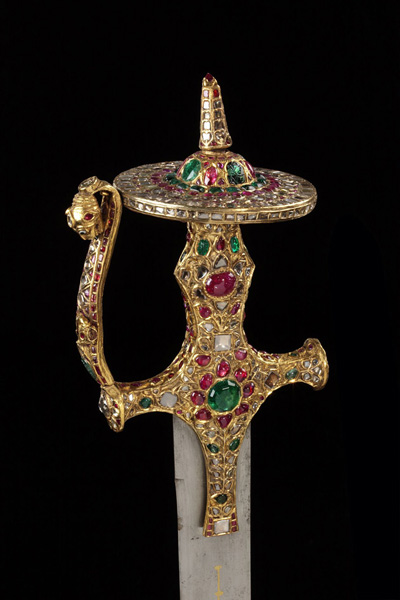 Maharajas gave bejewelled weapons and jewels to their favourite members of the royal court. How do you demonstrate who your friends are?
New to Tumblr? Start here.

This is the personal sword of the Maharaja of Indore of the Holkar family. The blade of the sword is made of steel and the hilt or handle is covered in diamonds, emeralds and rubies set in gold. The gemstones are arranged in a floral pattern with flowers in bloom, stems and leaves.

Swords are weapons usually used in battle for fighting one-on-one. The fact that this sword is highly decorated with such precious and valuable materials however, suggests that its purpose was a symbolic one.

Ceremonial weapons were an important part of royal adornment. Maharajas were expected to exercise rajadharma – the duties, behaviours and court practices appropriate to a king including protecting their kingdom and subjects using martial skills. This sword symbolizes both the wealth and physical power of the Maharaja.

The story of this sword in particular reflects the shifting power in India during the time of British imperialism. At the decisive battle of Mahidpur in December 1817, the state treasury of the Holkar family was captured, including this sword. After the battle, this sword was given to Sir John Malcolm, the political agent of Sir Thomas Hislop, the commander of the British army in the Deccan region of India. Maharajas and their allies often exchanged richly embellished weapons as a sign of favour and recognition of status.