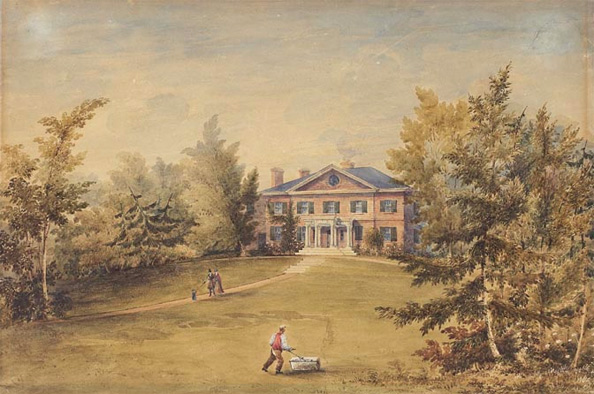 The Grange: A National Historic Site

The Grange was built about 1817 for lawyer and merchant D’Arcy Boulton jr. in an area of exclusive residential estates in the town of York, now Toronto. One of the few such houses to survive, its symmetrical 5-bay façade and central pediment reflect the conservative influence of 18th century British classical tradition. The west wing represents two later additions. One from the 1840s and the other built in 1885 for the new owner, eminent public figure Goldwin Smith. In 1911, through the bequest of his wife Harriet the house became the property of what is now the Art Gallery of Ontario.

Harriet Boulton Smith, the last owner of The Grange, married prominent historian and liberal thinker Goldwin Smith in 1875. In 1975,the Historic Sites and Monuments Board of Canada designated him a person of national historic significance. The plaque to Goldwin Smith, also received in 1984, reads as follows:

Born and educated in England, Goldwin Smith taught history at Oxford and Cornell before moving to Toronto in 1871. He married Harriet Boulton in 1875, widow of William Henry Boulton of The Grange. From The Grange, Smith wrote in controversial and compelling style for periodicals such as Canadian Monthly, the Week and his own Bystander. Initially a proponent of Canadian nationalism, he later became, contrary to growing imperial sentiment, a strong advocate of commercial union with the U.S. This view in 1891 inspired his best-known book, Canada and the Canadian Question.

The Grange was the first home of the Art Museum of Toronto (later to become the Art Gallery of Ontario) and rests today as a historic Georgian manor in downtown Toronto, Canada...

The Grange has been added as a feature site on the Building Stories website and smartphone application that enables Canadians to participate in identifying important community heritage assets. Visit the website and download the free mobile app.

Murmer: Hear You Are

[murmur] is a documentary oral history project that records stories and memories told about specific geographic locations. Hear You Are is an online exhibition of [murmur]'s presence in and around Grange Park in Toronto.

This online exhibition recounts the story of the historic Grange house and its inhabitants.