The Royal Procession Boldly Leaves the AGO 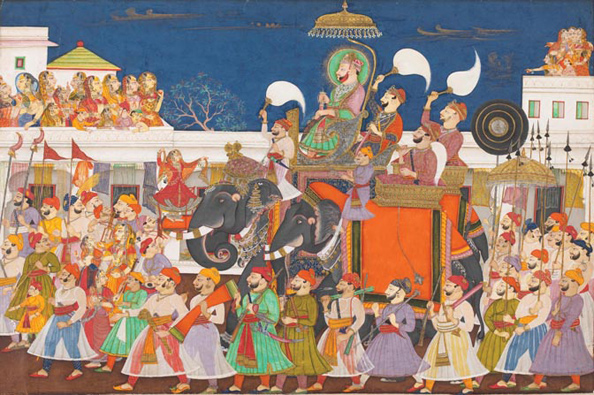 (TORONTO - April 5, 2011) The exhibition that brought the splendour, luxury, and legacy of India's greatest kings to the Art Gallery of Ontario closed on April 3, drawing 162,719 visitors in its 19-week run, close to 40 per cent visiting the Gallery for the first time.

Dubbed the "jewel in the AGO's crown" by the Toronto Star, Maharaja: The Splendour of India's Royal Courts was organized by the Victoria & Albert Museum, London in collaboration with the AGO.

"We are proud to have been able to celebrate the extraordinary cultural legacy of the maharajas of India," says Matthew Teitelbaum, the AGO's Michael and Sonja Koerner director, and CEO. "This exhibition engaged many first-time visitors, expanded the definition of art in our lives, and capped another year of robust programming."

The AGO expects to conclude its 2010/11 fiscal year with a balanced budget and an annual attendance figure of 612,988, outperforming pre-Transformation attendance levels, following a strong 2009/10 year which included the resounding success of King Tut: The Golden King and the Great Pharaohs.

Maharaja: The Splendour of India's Royal Courts comprehensively explored the opulent world of the maharajas and their unique culture of artistic patronage. The exhibition spanned 250 years of history and featured over 200 objects. Highlights included paintings of spectacular royal processions; royal costumes and traditional dress; ceremonial weapons, including daggers, swords, and matchlock guns; elaborate jewellery commissioned from the French house of Cartier; prized photographs by artists such as Man Ray and Cecil Beaton; and a saffron-coloured 1934 Rolls Royce Phantom II.

The exhibition has received more support from the corporate community than any exhibition in the Gallery's 110-year history, resulting in the unprecedented offer of FREE admission to visitors 25 and under for the run of the exhibition. This offer saw 47,210 youth take the opportunity to experience the spectacular works of art created for India's great kings. This offer was generously supported by the Patrons of the Exhibition: Fairfax Financial Holdings Ltd., The Globe and Mail, Rogers Communications Inc., and Scotiabank Group.

Over 60,000 members attended Maharaja: The Splendour of India's Royal Courts, and as a direct result the Gallery acquired 4,127 new members.  More information about membership can be found at www.ago.net/general-membership.

Maharaja: The Splendour of India's Royal Courts was curated by Anna Jackson, deputy keeper of the V&A's Asian department, with consultant curator Amin Jaffer, international director of Asian art at Christies, and research curator Deepika Ahlawat. Stephen Inglis was the AGO's adjunct curator for the exhibition.

The closing of Maharaja: The Splendour of India's Royal Courts makes way for Abstract Expressionist New York, the Gallery's major summer exhibition opening on May 28.

The summer season at the AGO will also feature Brian Jungen: Tomorrow, Repeated – Winner  of the 2010 Gershon Iskowitz Prize at the AGO, opening May 7 and Haute Culture: General Idea – A Retrospective, 1969 – 1994, opening July 30. This fall’s highlight is Chagall and the Russian Avant-Garde: Masterpieces from the Collection of the Centre Pompidou, Paris, opening October 15.

This exhibition has been financially assisted by the Ontario Cultural Attractions Fund, a program of the Government of Ontario through the Ministry of Tourism and Culture, administered by the Ontario Cultural Attractions Fund Corporation. It is supported by the Department of Canadian Heritage through the Canada Travelling Exhibitions Indemnification Program.