What is the throne made of? How can you tell? What do these materials communicate about the sitter? Examine the materials closely.

Examine the shape and form of the throne. How would you describe the shape of the throne and the decorative pattern? What do you think is the handles at the base of the seat are used for? 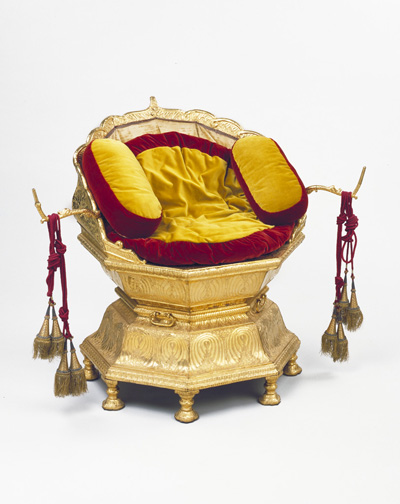 This throne demonstrates an exchange between the royal cultures of India and Europe. How are you influenced by your own culture and the cultures around you? Where do you draw the line between influence and appropriation of culture?
New to Tumblr? Start here.

The throne is made of wood and resin covered in embossed sheets of gold, while the seat cushion in this image is made of velvet. These rich and lush materials communicate that the throne is intended for an extremely important and revered person, a maharaja.

The throne is in the shape of an octagon with eight sides. Along with the floral pattern and scalloped edging along the backrest, the throne looks like a flower blossoming. The handles at the base of the seat suggest the seat could be removed from its base and carried by attendants.

The story of this throne in particular reflects the shifting power in India during the time of British imperialism. The sarkar-i-wala or maharaja, Ranjit Singh, commissioned this famous golden throne to commemorate his conquest of the city of Multan in 1818. India was traditionally a furniture-less culture, and maharajas would sit on the floor on top of a gaddi, a richly embroidered textile and pillow. The fact that Ranjit commissioned a throne, a European royal tradition, shaped and decorated in an Indian style illustrates the growing influence of European culture on India’s royalty.