(TORONTO/MONTREAL – August 30, 2011) Four photographers — two each from Canada and India — have been shortlisted for The Grange Prize 2011, Canada’s largest cash prize for photography. The winner of the $50,000 prize is chosen by public vote, which opens today and continues through October 23 at www.thegrangeprize.com. The winner will be announced at a gala reception hosted by presenting partners Aeroplan and the Art Gallery of Ontario (AGO) on November 1.

The finalists for The Grange Prize 2011 are: 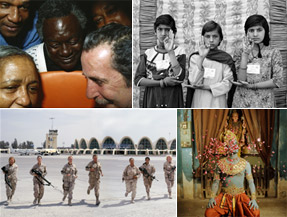 The four finalists were selected by a nominating jury comprising AGO acting curator of Canadian art Michelle Jacques; Wayne Baerwaldt, the acting vice president of research and academic affairs at the Alberta College of Art + Design in Calgary; Gayatri Sinha, a Delhi-based art critic and curator; and Sunil Gupta, a photographer, writer and curator born in India and living in New Delhi and London, UK.

“The artists shortlisted for The Grange Prize this year share a fascination with the human subject and, in particular, concepts of personal identity, performativity and social politics,” says Jacques. “Rooted in the documentary history of photography but complicated by contemporary questions of image-making and constructed realities, this year’s shortlist addresses vital and current topics in photography while offering the public a richly diverse selection of photographic artists to learn about, engage with and support.”

Each of the four shortlisted artists receives an international residency: this year, the Canadian nominees will travel to India, and the Indian artists will visit Canada. In addition to the $50,000 awarded to the winner, the Prize awards the three remaining shortlisted artists $5,000 each toward the creation of new work— granting a total of $65,000 to photographic artists each year.

Multiple works by all four artists will be on view at the AGO in The Grange Prize 2011 Exhibition, opening today through November 27. The exhibition also features video interviews with the artists and a voting station for AGO visitors to vote for their choice in person.

All four shortlisted artists will be at the AGO on September 7 for The Grange Prize 2011 Launch Party, a free, late-night public party at the Gallery. The celebration will feature a cash bar in Walker Court, snacks, a DJ set by Jaime Sin, and video interviews and live advocates highlighting each of the artists. The party starts at 7 pm, and Walker Court and The Grange Prize 2011 Exhibition will stay open until 10 pm.

Contemporary programming at the AGO is supported by the Canada Council for the Arts. Updates, blog postings and more information about The Grange Prize can be found at www.thegrangeprize.com.

Aeroplan, Canada’s premier coalition loyalty program, is owned by Groupe Aeroplan Inc., a global leader in loyalty management. Aeroplan is a long-standing patron of the arts, with a history of supporting artists and arts initiatives across Canada. Of particular significance is the company’s work, in partnership with the Art Gallery of Ontario, to develop The Grange Prize for contemporary photography. Aeroplan is committed to fostering a long-term, international dialogue about this important art form. Aeroplan has also joined the AGO in a partnership as the Signature Partner of the Photography Collection Program, supporting planned AGO activities to engage visitors with photography, including special lectures and tours.

With a permanent collection of more than 80,000 works of art, the Art Gallery of Ontario is among the most distinguished art museums in North America. In 2008, with a stunning new design by world-renowned architect Frank Gehry, the AGO opened its doors to the public amid international acclaim. Highlights include Galleria Italia, a gleaming showcase made of wood and glass running the length of an entire city block along the Gallery’s façade; and the feature staircase, spiraling up through the roof of Walker Court and into the new contemporary galleries above. From the extensive Group of Seven collection to the dramatic African art gallery; from the cutting-edge works in the contemporary tower to Peter Paul Rubens’ masterpiece The Massacre of The Innocents, a highlight of the celebrated Thomson Collection, there is truly something for everyone at the AGO.