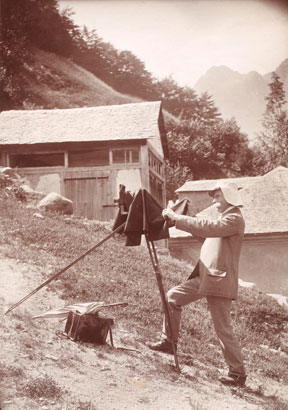 (TORONTO - February 23, 2011) A University of Toronto student completing an internship at the Art Gallery of Ontario last summer discovered that a series of 1,702 photographs auctioned at Christie's in 1997 and acquired by the AGO in 2005 were taken by the previously unknown French photographer and painter Abel Boulineau. Vanessa Fleet, who is pursuing a master's degree in museum studies, re-examined the photographs after learning that Gallery curators questioned the original attribution-to French photographer Émile Fréchon.

The reattribution was spurred by Fleet's discovery of an inscription written on the back of one of the photographs by the photographer: "Auberive-Avenue de l'Abbatiale-where I was born, 16 March 1839." With the artist's date and place of birth in hand, Fleet obtained the parish records for the town of Auberive. Due to the town's small birthrate in the mid-1800s, Fleet discovered that the single baby boy born in Auberive on March 16, 1839 was the photographer in question: Abel-Marie Nicolas Boulineau.

A new AGO exhibition tells the story of this discovery and displays for the first time more than 70 of Boulineau's photographs depicting French regional life. The photographs in the collection were taken between 1897 and 1916 and feature charmingly composed rural scenes of shopkeepers and children, washerwomen and tradespeople, markets and villages, and scenic landscapes. "Where I Was Born...": A Photograph, a Clue, and the Discovery of Abel Boulineau will be on view from March 5 through August 21, 2011, in the AGO's Carol Tanenbaum Gallery.

"Boulineau's gem-like photographs are at once a romantic depiction of rural French life at the turn of the century and a comprehensive photographic record of an artist's encounters with people he met and places he visited-I have seen nothing else like this collection," says Sophie Hackett, the AGO's assistant curator of photography and the curator of "Where I was born...". "Boulineau is a new figure who straddles the 19th and 20th centuries alongside many painters who turned to photography and contemporaries like Eugène Atget. The discovery of his photographs reminds us that there is still much work to be done in the history of photography."

Completely unknown in the history of photography, Abel Boulineau was a painter and teacher at l'Association polytechnique in Paris. There is much evidence to suggest that Boulineau modeled many of his paintings after the photographs in this collection, which was given to the AGO by an anonymous donor in 2005. Boulineau died in 1934.