Built in 1817 for D’Arcy Boulton Jr. and his wife Sarah Anne, The Grange was the first home of the Art Gallery of Ontario and is now a national historic site. In 1875, Hariette, widow of William Henry Boulton, married scholar and journalist Goldwin Smith. The Smiths continued to live in The Grange until their deaths when the house was left by Harriette in her will to the Art Museum of Toronto, now the AGO. This exhibition recounts the story of the house and its inhabitants.

What is your family’s story? What places, objects, or modes of transport are central to your family history? Think about how you would tell that story using a combination of photographs, documents, objects, and narrative. 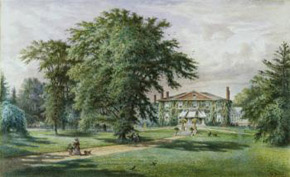 Jennifer Rieger is the Site Co-ordinator of The Grange at the Art Gallery of Ontario. Jennifer has worked as a freelance museum consultant for many museums and heritage sites, including Mackenzie House, Fort York and Spadina Museum. She has been with the AGO since 1996. 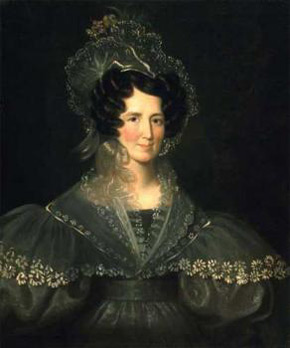 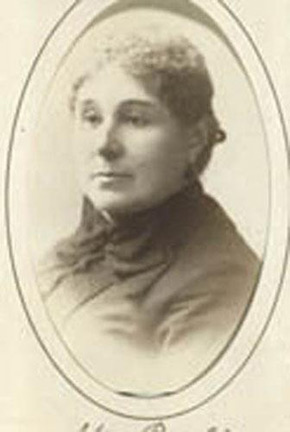 Sarah Anne’s family, the Robinsons, were among the United Empire Loyalists who supported England during the American Revolution. They left their Viriginia home to settle in Canada. Her brother, John, became Attorney General of Upper Canada. Sarah Anne supported many charitable organizations including the Protestant Orphan’s Home, St George the Martyr Church (built on The Grange’s property), and the Society for the Relief of Poor Women.

"At a meeting of the governesses of the Society for the Relief of Poor Women during their confinement, held at the Government House, it appeared from examining the books, that since the commencement of this benevolent institution four years ago, fifty poor women had been comfortably attended during their confinement. Of this number, thirty-eight were the wives of emigrants newly arrived in the province, who had exhausted their little means in travelling from their native country, and who were so totally destitute before they reached York [now Toronto], that but for the seasonable interference of this charity, many of them would have perished." 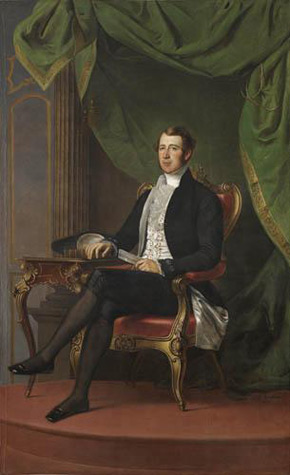 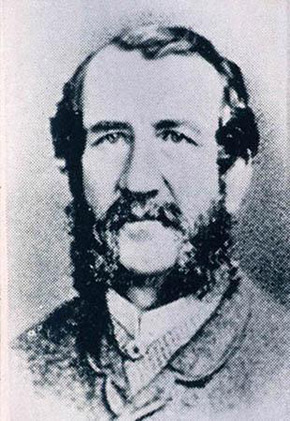 "Mr. William Henry Boulton is acknowledged to be one of the most enterprising, if not the most enterprising of our fellow citizens, in undertaking and furthering useful improvements. He is a large capitalist, and to his credit be it said, he does not lock up his money, but he employs it in a way that, we trust, may be profitable to himself, as well as advantageous to the community..."

"William Boulton has the good sense not to speak often, but when he does, he states his views clearly and decidedly. . . he only speaks on local measures, and as party speeches, his efforts are models. His manner of speaking is boyish –the kind of half-joking half-doubting style which a privileged, petted young man is apt to adopt among his seniors. Mr. Boulton, in short, is an energetic, sharp, ambitious young man – but without principle, or steadiness of purpose, or extent of mind to qualify him to sit in Parliament. As a member of a municipal corporation he may be very useful – as the parliamentary representative of Toronto, he is quite out of his place." 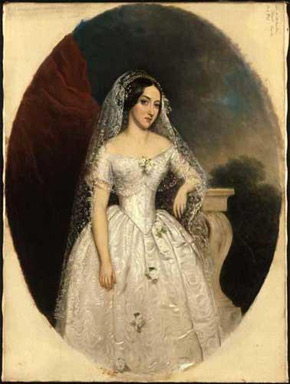 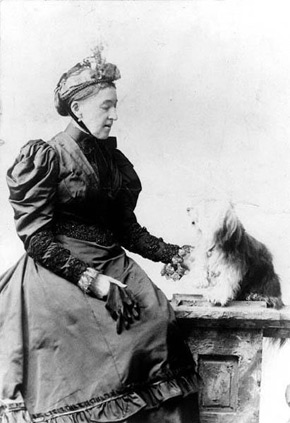 Harriette Dixon Boulton, William’s wife, was born in Boston, the daughter of the consul-general to the Netherlands. It appears that William was not completely trustworthy, prompting her brother Homer Dixon to move to Toronto to watch over her financial affairs.

"From the time of her marriage Mrs. Boulton (who knew nothing about business) gave all the monies she received to her husband and after her father’s death gave a Power of Attorney authorizing her Trustees to pay everything to her husband Mr. W. Boulton." 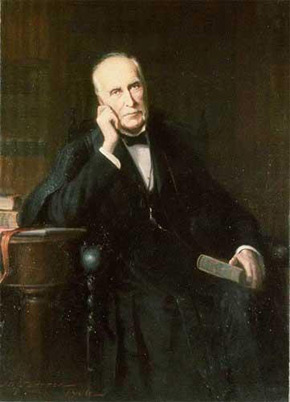 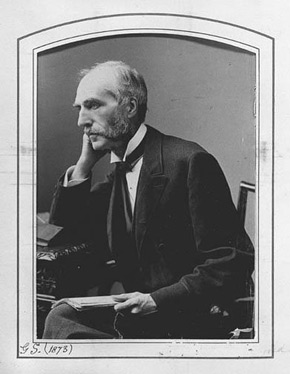 "Goldwin Smith’s character was depicted on his face – grim, thoughtful, disappointed, critical, resentful, tenacious, dogged, lofty, reserved, craving sympathy, yet loath to ask it, shyly looking for acquiescence, yet too proud and too reserved to divulge the search, determined yet distrustful – a warfare between the keenness of his intellect and the deficiency of his emotions, a warfare of which he himself was perhaps dimly aware." 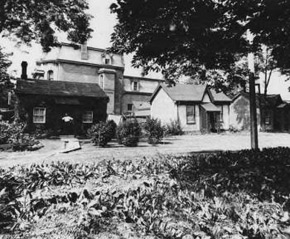 Cottages were built in the 1870s for married couples who worked at The Grange. In her will Harriette provided for two long-time servants:

"It is my desire that my old servants James Stillaway and Rose Bullock should have the use of the cottages that they now occupy and enjoy in the rear of The Grange, and being upon The Grange property, with free access thereto only from Beverley Street for the term of their natural life free of rent but this is not to interfere with the previous disposition made herein of the property [i.e. that of the Art Museum]." 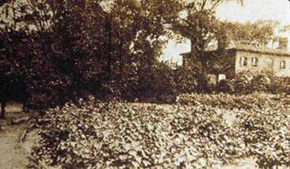 Excerpts from the Toronto publication Saturday Night describe the numerous social events at The Grange House.

"If only it were summer, then would those who are invited to The Grange enjoy the charms of a garden of which there is none more charming in Toronto. Wide stretches of lawn, splendid and venerable trees, beds with the sweet best of old fashioned flowers and, if one dares penetrate it, the delights of walled-in kitchen gardens." 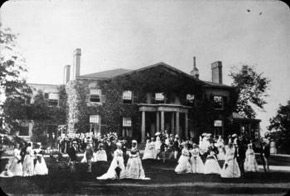 Mr. and Mrs. Goldwin Smith have sent out invitations for a garden party on Thurs. June 28. Everybody will doubtless be there and given on a fine day, the scene will be as brilliant as it was on a similar occasion, and at about the same time, last year." 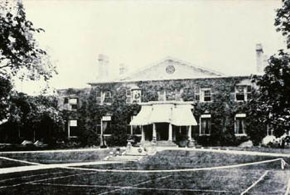 "Mr. and Mrs. Goldwin Smith’s Thursday afternoons of tennis, talk and tea at The Grange are as popular and well attended now as they were in the early summer. Many ladies who do not consider themselves up to club form and shirk the game at the Toronto Club, Mondays, wield the racquet with confidence under the friendly auspices of Mr. and Mrs. Smith."

Goldwin Smith’s letters indicate an approximate value (in 1910 dollars) of The Grange residence and surrounding property.

"This is a beautiful property with very fine lawn and handsome trees. The Residence is very substantial. The main part of the house is quite old, having been built in the year 1817. The inside woodwork is mostly black walnut, the rooms and main halls are large and spacious and the whole property has been well kept up and is in good repair. I consider The Grange property to be of the value for Residential purposes of $85,000. The land would be valued at $3500." 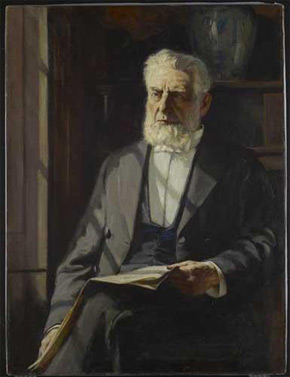 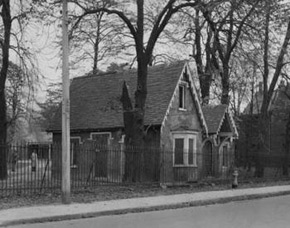 William Chin worked at The Grange for more than 50 years, many of them as butler. Chin, his wife and their seven children lived in the Gatehouse at the foot of The Grange.

His final entry in his pantry book reads:

"Today I leave the dear old Grange to become...a wanderer."