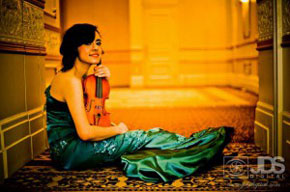 In cooperation with the Toronto Summer Music Festival, the AGO hosts a concert featuring young artists from the Chamber Music Institute of the Toronto Summer Music Academy. Hear these talented young musicians perform repertoire drawn from the Festival’s program of Music of the New World:  Dvorak ‘American’ String Quartet Op. 96 and the ‘American' String quintet for two violas Op.97.  Dvorak claimed that these two pieces are based upon folk melodies he heard during his time in America.

The Toronto Summer Music Festival has grown to become one of Toronto’s most eagerly awaited classical music events, featuring a line-up of international stars like pianists Garrick Ohlsson and Ingrid Fliter, soprano Karita Mattila, jazzman Danilo Pérez, the Danish and Borromeo String Quartets, and more. From July 16 - August 9, 2015 music of the New World features the great composers of the Americas, European composers who sojourned in the Americas, and those attracted to the New World – the open-hearted spirit, unfettered opportunities, freedom from oppression, and wide-open spaces that inspired new musical forms and traditions in the 20th Century.

Presented in collaboration with the Toronto Summer Music Festival.